Dr. Amitabh Mehrotra completed his Master’s in Social Work from Tata Institute of Social Sciences (TISS), Mumbai in 1987. He has worked in various Organizations like Tata Steel Rural Development Society, Jamshedpur and in NGOs in Jharkhand and Uttar Pradesh in the field of Rural Development and also for Persons with Disabilities (PwDs)/Children with Disabilities (CwDs) and marginalized section of the society to bring them into the mainstream. He has recently completed his Ph.D. in Applied Psychology on “Inclusion of Challenged Persons in Rural Settings” at Lucknow University. Also, he has been a member of more than 15 National/International committees in the field of disability and rehabilitation viz a member of Governing Council of the National Institute for Empowerment of Persons with Multiple Disabilities (NIEPMD), Chennai. 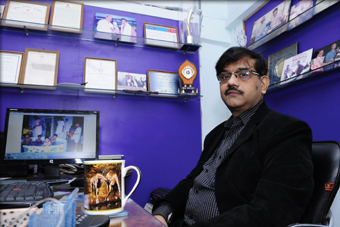 Dr. Amitabh has published more than 5 articles in National magazines. Recently a write-up on Dr. Mehrotra had appeared in a publication jointly published by the National Handicapped Finance Development Corporation (NHFDC), Government of India, and Penguin in which a hundred biographies of differently able persons who are social entrepreneurs across the country. He has been a resource person and participant in various training and Conferences at the National as well as international levels. Mr. Mehrotra himself is having Cerebral Palsy with tremors and mild spasticity since birth.

After noticing the negligence of the Disability issue and through various personal experiences Dr. Mehrotra founded School for Potential Advancement and Restoration of Confidence (SPARC India) in 1996 at Lucknow as its Founder Chairperson and Director. SPARC-India has been implementing Community-based rehabilitation (CBR) in urban slums of Lucknow and rural areas of Deva and Nindura Blocks of Barabanki District in Uttar Pradesh. He is also the Founder Principal of Jyoti Kiran School-An an Inclusive School (started in 2003). The Cerebral Palsied children/Children with other disabilities are both being educated as well as receiving medical care (physiotherapy, audio, and speech therapy) and training for Activities of Daily Living (ADL) at the school. The organization was identified as a lead partner for the state of Uttar Pradesh by DFID UK in 2012 to implement a program on rights and entitlements of Persons with Disabilities and also for another program on Skill Development and Placement program for Youths with Disabilities. SPARC India has received more than 16 awards under his strong leadership, commitment, and vision towards an inclusive society. SPARC India a think tank of Dr. Amitabh Mehrotra is running its programs in more than 30 districts of Uttar Pradesh and has covered more than 1,50,000 Population and benefitted more than 30000 Children / Persons with Disabilities, and still continuing to work in this direction. Activities of SPARC-India have been telecasted as short films both at regional and national channels of DD News and IBN7 Channels.

Nominated as a member of State Advisory Board on Disability of Uttar Pradesh.